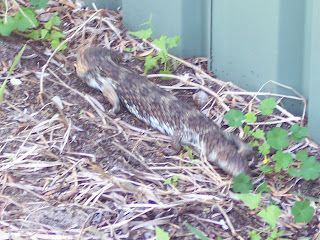 Wednesday 15th October 2008
Carolyn took it upon herself to plant out our Tomato plants and weed some of the garden today, it was a very hot day today and while she was working she found a Lizard, she thinks it’s a Gecko and took some photos of it but we don’t really know what it is.
The Handyman came to the Café this evening to fit the Base Units of the Take Away Counter which meant that Ian didn’t get home from work till late, still the bases look good and he is bringing the counter top tomorrow evening to fit it as he only cut it to shape today and had to take it away to laminate it.
While the Handyman was bringing his gear in, Ian gave Fliss permission to dismantle the old counter much to her joy. She borrowed a hammer and between her and her housemate Aimee they demolished it apart from one section which they took home and stuck it outside their front door, on the front of the bit they saved it reads Donuts 70c Each or Buy 5 Get 1 Free so what the neighbours will think, god only knows.
Also, never ones to miss a trick, when they were putting the demolished counter into the skip they noticed some Nivea blow up beach balls in there, so they climbed in and got them so that they could take them home and blow them up. Whether they mean put air in them, or throw hand grenades at them you just can’t tell in that house.
Posted by The HoJo's at 12:34 PM

lol - have got great mental picture of girls throwing grenades at masses of blow up beach balls in a random front room!

ps - my word verify letters are

what is that when it's at home!?

you are nutty - you should change your name

ps this time my word verification is

hee hee their front room is indeed random ;o) they are an funny pair but we like em!
I was going to post the other day how I love it when the verify word is a real sounding made up one, but I thought people might think I'm odd (more odd)


Hello Mrs SM, lovely to see you here, welcome, put your feet up, have a beer!
xc

How did they know you have a new oven, thats scary!
:o)
xc
(thats mrs hojo-mac-nutty to you)

That's not a gecko, it's a bob-tail. Similar to a blue tongue lizard but with a stumpy tail.

Hey, if that's your lizard that's no geko. That's a blue tongue lizard! lol. You're lucky to have them. Youe environment must be ecologically sound.

Lizard identification goes way beyond my capabilities as a commenter I'm afraid... all I can contribute is
'It looks like a lizard'

or maybe a snake.

Do they mean dis finger or dat finger?

arrrggghhh which lizard is it? perhaps I should post a non blurry picture
xc

Go with Marcus' bobtail. My glasses aren't good enough & my eyesight is the pits. I should ask Dearest; he kept reptiles as pets as a child but he's sleeping just now. Do Blue tongues drop their tails when frightened? Hm. Something to find out.