Sunday 12th April 2009
We went to visit a couple more caves today, they are both down towards Augusta and on the same ticket as the Lighthouse and Jewel Cave tours that we did on Friday, they were Mammoth Cave and Lake Cave.
We went to Mammoth Cave first, there were never any mammoths in this neck of the woods so it got its name because it is very big.
The Cave offers a self guided tour using MP3 technology, so you can take as long over it as you want, you just tap in a number at the points of interest and get a full commentary as you go round. 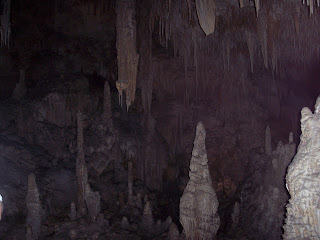 When we came out of the cave, we took a walk through the forest of Marri and Karri trees that surround the cave, they are quite spectacular, untouched apart from the odd bushfire for hundreds of years. There were hardly any dead ones, even the ones that had been caught in bushfires were still growing above the point where the bushfire had swept through. 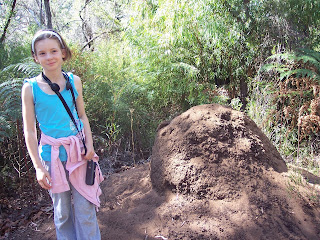 We got the girl at the Mammoth Cave reception to phone ahead and get us booked on a tour of Lake Cave, she managed to get us booked on one an hour and a half later, so we drove there and had Tea with Hot Cross Buns while we waited for our turn.
How civilised is that eh, 30+ Degrees and there we were, sitting outside eating Hot Cross Buns and drinking Tea, almost reminiscent of the days of the Empire.
When we had finished eating and drinking we went into the visitors centre, there were the usual displays and descriptions of how the cave was formed and a manmade fibreglass tunnel which was supposed to be a cave tunnel simulation and a good excuse for the kids to chase each other through it. 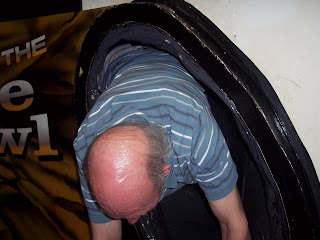 Carolyn and her dad both went through the tunnel much to the amusement of the kids, Ian preferred to walk round instead.
When we went to join the tour we had to descend about 300 steps just to get to the entrance of the cave, it was in the bottom of a massive crater known as a Doline, basically a cave where the roof had fallen in.
From the entrance to the cave, we then had to descend a load more steps before we reached the water level in Lake Cave.
We followed a small stream which slowly spread out in front of us, there were, Stalactites, Stalagmites, Straws, Columns and a Suspended Table made from Stalactites that had reached the water level and joined together many years ago and now just hung there above the water since the water level went down. 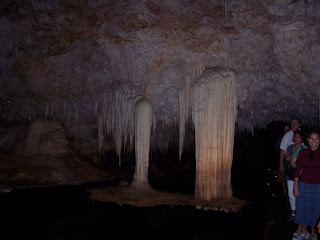 With all the lights and shapes glistening off the surface of the water, it was quite spectacular and well worth the visit.
Then came the hard bit, we had to get back to the top again. 300+ Steps and we all did it in one go, Kristian seemed to run most of it while the rest of us put our defiant heads on and marched to the top without stopping.
At the top we stopped at a viewing point to get our breath back and wonder whether we were wise to do the steps in one hit, it hurt a bit but none of us died of heart failure, therefore it must have been good for us.
Apparently, some time ago, some plonker said “what doesn’t kill you makes you stronger”, he/she obviously hadn’t walked up those steps in one go before, it didn’t kill us, but we certainly felt weaker for doing it, although the fact that it was past lunchtime might have had some bearing on it.
Having got our breath back, we drove to Margaret River for lunch. The problem with going to Margaret River for a late lunch on a Sunday is that, despite the town being chock-a-block with people looking for entertainment and food, everything (virtually) closes at 2pm.
We did find somewhere in the end, a Café called Sails, we were going to have a look at it when we were down this way over a year ago, it was closed.
It was up for sale then and we were having a weekend in Margaret River while looking at different businesses in the area that were up for sale, it had closed by the time we got to Margaret River so we decided that we would go and have breakfast there the following morning, looking at it from a customers point of view.
Anyway, we got a call from the agent who was handling the sale of the Olde Chapel Café suggesting that we might like to put in an offer on the Olde Chapel just in case the sale fell through, Sails was closed the following day and the rest as they say, is history.
We had a nice lunch at Sails although they did close the kitchen just after we arrived, we don’t think it had anything to do with us, but it certainly upset a lot of other people, who seeing us sitting outside eating assumed that the place was open and were not happy when told otherwise.
After lunch we had a little walk along the Banks of the river in the hope that Carolyns dad might see a Kangaroo, but to no avail. 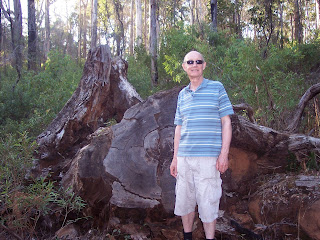 We headed for home, stopping at the Beckett’s Flat Winery to sample and purchase some wine, we were probably not in the right frame of mind for tasting serious wine and opted for a few bottles of Rose to take home, it tends to be our preferred wine on the odd occasion we do drink wine, easy to drink, whatever the occasion.
Posted by The HoJo's at 1:44 PM

looks lyk you lot have been on a few adverntures, not been in a cave myself, should definetely consider it :D