Sunday 19th April 2009
Today we had to take Carolyns dad back to Perth ready for his flight back to the UK, we decided to make a day of it and went to have a look round the Fremantle Prison.
We left home about twenty minutes later than we had intended but thought nothing of it, there won’t be anyone on the road on a Sunday morning anyway.
Wrong, not only is it still holiday season, but there are quite a few roadworks going on this weekend as well, hence a rather slow drive to Fremantle.
Carolyn had rung the prison yesterday to book a tour for today, but as we were driving up we knew it was going to be touch and go as to whether we would get there on time, so Carolyn rang them again and got our tickets changed to a tour half an hour later. Don’t you love mobile phones? That’s probably the second useful thing it’s done since Carolyn got it for Christmas, the first was ordering a taxi from the pub.
We were right to change our tour time, we arrived about ten minutes after the original tour started, but that gave us a bit of time to look round some of the exhibits and the gift shop
Fremantle Prison must have the worst tourist gift shop on the planet, it didn’t have much to offer in the way of merchandise and what there was would probably appeal to the average punter just a bit less than spending a bit of time in the prison itself, Carolyn did manage to find a fridge magnet.
The Prison tour itself was quite interesting if a bit grim, the Guide was very stern and not impressed with the Japanese tourists that kept wandering off to look at things while he was talking. 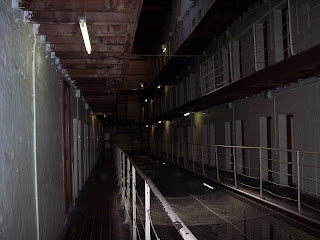 The Prison was grim, stark and the rooms were tiny with no facilies, just a bucket with a lid.

We saw the Cells and Exercise yards, the Kitchens and Chapel, the life that the prisoners must have had in there must have been a nightmare, unless of course you are one of the top dogs in which case it would have been a bit more comfortable.
Then we were shown the flogging post where naughty prisoners were tied to it and whipped with the Cat o Nine Tails, apparently when you were on the verge of death they would cut you down and chuck a bucket of salt on your wounds before taking you to the infirmary to recover. After a few weeks recovering, you would then be taken back to the post, tied up and be whipped again until you were on deaths door again or the punishment had been completed.
Apparently the average prisoner could take about 17 lashes before needing to be cut down and taken to the Infirmary, the maximum punishment was 100 lashes and the punishment had to be completed, so a prisoner could go through the cycle of lashes and recovery several times before his punishment was complete if he was a particularly naughty boy.
Corporal Punishment was only abolished in Western Australia in 1993, although the last time it officially took place at the prison was in 1943 and the last Birching was in 1962.
At this point, Kristian was going a bit green round the gills and refused point blank to go into the next exhibit, the Gallows, he is only eight after all.
As we walked into the room that housed the Gallows we were faced with this Noose just hanging from a beam, with a big drop below, it was a bit eerie and probably not the sort of place we’d want to make a habit of visiting, having seen one is enough we think. 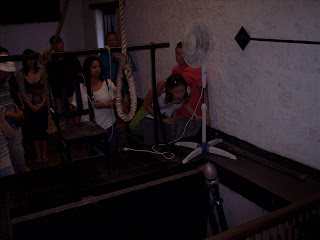 Yes, we stood and peered down the trap door, gulp, the noose hasn't been used, it was burned after each use so that someone who had confessed their sins wouldn't be hanged by the same noose as someone who hadn't. Not the done thing apparantly.

The tour lasted about an hour and a half and was informative, although we felt like there was a lot that we hadn’t seen or heard about, but we suppose that’s why they have about three different tours to choose from.
From the prison we drove down to the waterfront and had some Fish and Chips at Cicerello’s, the waterfront was heaving with people as it was a nice day, the businesses down there must make a fortune in good weather.
After dinner we went up to the Market in town before driving to Carolyns dads friends house, the same friend who picked him up from the Airport and drove him down to Busselton when he first arrived.
We had a cup of tea before saying our goodbyes and driving back to Busselton, leaving Carolyns dads friend to give him a lift to the Airport for his flight home tonight.
We got home just after 8pm and put the kids to bed before having an early night ourselves, we have driven just over 500km today and it is virtually all monotonous driving so is very tiring.
Posted by The HoJo's at 2:36 PM

I do remind myself of these things when I feel the need to soapbox about conditions in 3rd world countries though anyone who supports the death penalty should be made to do one of these tours. They give me nightmares so I don't do them anymore.