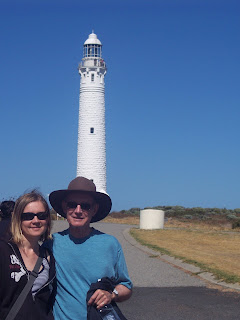 Friday 10th April 2009
Today is Good Friday and a chance for us to get out as a family and do the tourist thing, so we headed for Augusta.
A couple of weeks ago we did the Augusta Lighthouse Tour while Marisa was away on camp, we thoroughly enjoyed it and thought that it would be the sort of thing that Carolyns dad would enjoy doing and Marisa would never forgive us if she had to wait too long to visit a place that her brothers had already visited.
We drove down to the Lighthouse and got ourselves booked on a tour for about forty minutes later, so to pass the time we jumped back in the car and drove a few hundred metres down the road to the remains of an old Watermill that used to serve the site that the Lighthouse has been built on.
Carolyns dad is a Millwright back in the UK, so to see this Waterwheel on the other side of the world and read about its history was of interest to him.
After looking at the Waterwheel we went back up to the Lighthouse and had a look round the grounds, it is situated on an outcrop of land that separates the Indian Ocean from the Southern Ocean, that is to say the bit of land only keeps them apart until the land disappears, then it’s a bit of a free for all really.
It’s incredible really how they can tell which bits of water belong to which ocean when they get so close to each other that you can’t even see the join.
After going up the Lighthouse and having a look round we went back to the reception to ask them to book us on to a Cave Tour that was on the way home, they rang through and got us on a tour about an hour and a half later. 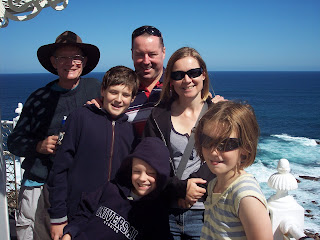 So with an hour and a half to spare and the cave only fifteen minutes away we drove into Augusta for a spot of lunch, we stopped at a Deli that we had stopped at on our first visit to Augusta.
If you are ever in Augusta and feeling a bit peckish, the Gourmet Deli is the place to go, this is only our second visit but it was as successful as the first.
They have a good variety of foods from pies and cakes to sandwiches and wraps, with some really interesting fillings and reasonably priced. It’s not very often that we all enjoy what we have ordered, so for us all to enjoy everything on two occasions is pretty remarkable. 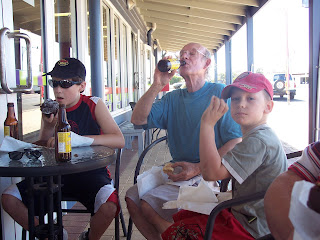 After lunch we drove to Jewel Cave, we arrived with about fifteen minutes to spare before our tour was due to start.
When the Guide introduced herself and told us a little bit about the cave and what we would see, she pointed out that we might start to feel very tired and out of breath, this would be because the CO2 level in the cave had risen above normal in the cave today.
If this sort of thing happened in the UK to the extent where they had to warn you about it, they would have cancelled the tour, at least until the Guide got Danger Money, so we were surprised to be told all this and for the tour to continue.
We expected Jewel Cave to be all sparkly and glitter, instead it was just a big cave that was quite interesting with the Jewel bit being probably the most least interesting bit of the tour.
It was hard work walking up and down the steps in the cave with the raised CO2 levels and we were certainly feeling it by the time we got out, but it was a good trip all the same. 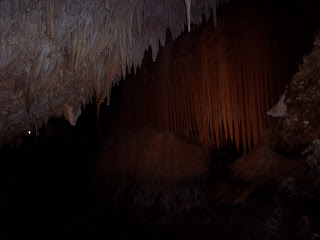