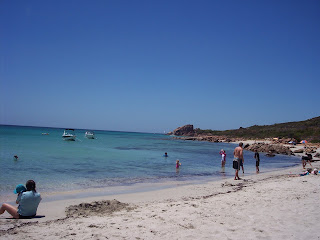 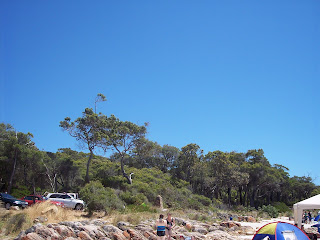 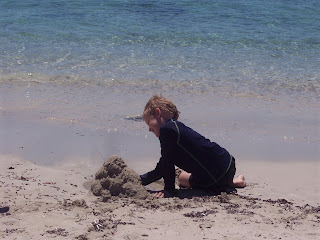 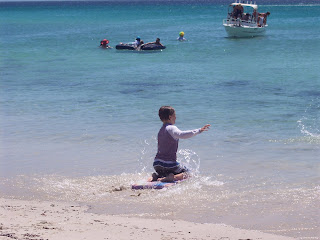 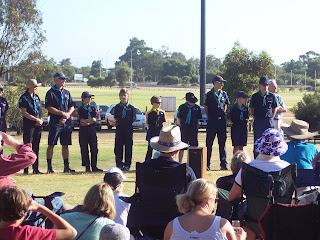 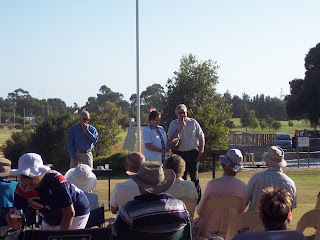 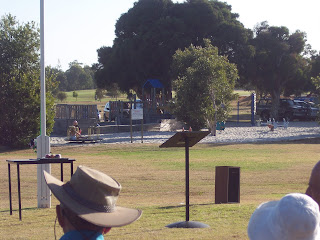 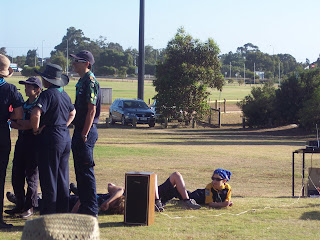 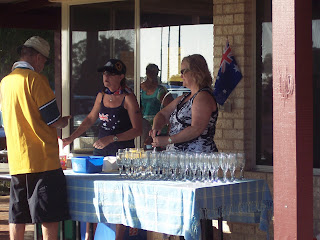 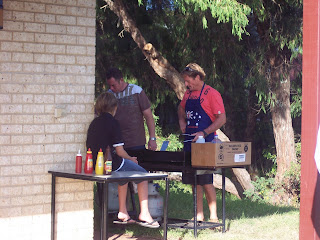 We started the day at Dunsborough, 8am sharp ready for parade. At 8 15 we asked what time the shebang was starting, around 8 15. At 8 30 people looked like they were nearly ready so we paid for our food and found a shady spot. Words to the first two verses of Australia Fair were handed out and the speeches started, and the speeches carried on, and on, and on, you get the idea? Eventually the scouts were told to sit down before they fell down. At last presentations were over, we sang, Troy Buswell managed to avoid making another speech. Carolyn got to meet him on Saturday as well so was expecting some flannel but nope, he was quiet today.The scouts did a good job of raising the flag at the opportune moment and it was all over. Carolyn rescued Kristian from the playground and Ian queued up for brekkie. Breakfast baps and sausage sizzle, good but full of bbq sauce which Ian doesn't like. Overall the verdict was positive, we chatted, we left and drove up to Smiths Beach, nobody fancied trying out quite large surf so we drove back to Castle Rocks near Meelup and lolled around. The children took it in turns to vanish on the kayak, boogie board on the shallows or snorkle. Ian read the paper, Carolyn read a magazine, excting stuff.
We went home for lunch and headed into Busso for a coffe while the children played in the water again. Watched a local kid get a ticket for starting fights and went home via the Video shop.
The builder popped round with a 'mud map' of the work we would like to have done on the house and stayed for a while chatting and plotting.
Yes I know the photos are back to front but I want to go and watch the film so I'm not moving them now.
Posted by The HoJo's at 8:53 AM

Great pictures, it looks like a fab day was had by all, just look at all that sunshine, im so jealous hehe!!

It was a scorcher here & my mum tried bowls! Eeeeew! We went & hid in the air conditioning & let mum fry. :) She was glad when it was over too & won't be taking up bowls.