Friday 18th September 2009
Carolyn was supposed to help out with reading at school this morning, but completely forgot about it because Kristian had to go to the Dentist.
Kristian was a brave little soldier at the Dentist, they removed an adult tooth from the back which involved a lot of pulling to and fro, Kristian was screaming, Carolyn was holding him down, there was blood flying all over the place and when Ian phoned Carolyn to ask her to pick something up on the way into work, she put the phone down on him.
Needless to say, Kristian was a tad traumatised after that so spent the day at the Café playing on the computer while we were working.
Just after lunchtime Carolyn got a call saying that she could have the @@@@@@@, so we are now proud parents of two Ridgeback/Retriever puppies who are only young, but one weighs 4kg while the other weighs 3.5kg, we’ll have to start breeding more rabbits so that we have enough food for them. 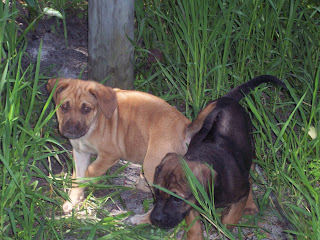 Carolyn tried to get rid of two more baby bunnies today at the pet shop, but there seems to be a glut of baby boy bunnies at the moment so they don’t want them, we’ll try again after the weekend.
Marisa came back from school camp today, she was absolutely shattered but she had a great time and when she saw the puppies, she burst into tears of joy, which is the sort of thing she does.
Posted by The HoJo's at 2:06 PM

I believe these grow quite big. You will need lots of bunnies ~ but mama bunny seems pretty disposed that way.

lol I'm starting to worry about our sense of humour. Most people don't find my jokes funny at this level. Heeheee.

I see nothing wrong with our humour ;o)

so far dry food is popular but....

How'd you think the kids would react if you started serving rabbit stew at the cafe? Seems a shame to waste it on the dogs, even if they are rather cute!