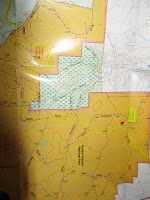 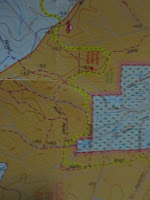 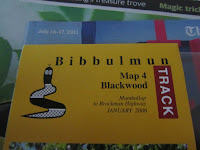 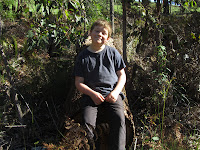 The Scouts needed another hike for badge earning and whatnot and I seemed to be next in line for 'volunteering' so I dutifully borrowed a proper pack and staggered up hill and down with 15kilos on my back! Fraser carried 1/4 of his bodyweight in his pack including a tent and a stove, Kristians pack we kept lighter because he isn't as long legged and muscly as Fraser. Marisa decided to get an abcess in her mouth requiring multiple types of drugs and couldn't go. Again. Shame, she loves this outdoorsy stuff.

We drove to the Lowden Grimwade Road, outside Donnybrook and hiked from 12 ish, we expected it to take until 4pm however a cheerful member of the team liked wandering from side to side finding shiny things and funky fungi so we got to the Noggerup Campsite just in time to introduce ourselves to the 5 people already at the shelter for the night, and then it got dark.

This section of the track has a few long sharp rises, minor undulations in Ians book, flipping steep hills in mine. It was hard work but beautiful scenery.

We heated many pots of water for essential cups of tea for the adults, hot chocolate for the children and pasta/noodle dishes for dinner. The rest of the 'guests' were in bed by 7pm so we let the boys have a quick game of cards and they went to bed by 7.30, earliest bed time on record for a Scout trip I suspect.

There were 7 in our group and not enough room in the shelter so 4 of the kids pitched the tents and slept in those, wise choice, it was freezing in the shelter. The temperature rapidly dropped below 0 degrees and even in 3 layers including thermals I was still shivering in my sleeping bag. I never thought I would yearn for a tent. I believe the practice of sleeping on a wooden shelf in the open with wolves and feral cats for company a little unusual. The long drop loo however was spotlessly clean no doubt due to the lovely people who were sharing it with us.

In the morning it soon warmed back up to 0 and by the time we had tried to encourage people to clear up, wash up and take down tents it was a balmy 4 degrees and I took off my 4th layer (which was required in order for me to be able to get out of bed).
We set off late again and marched off towards the Mumballup Tavern where Ian had arranged to pick us up with hot coffee from Tiffanys Cafe in Donnybrook.

We soon split into 2 groups again, making use of the 'cooee system' to stay in touch. It is quite accurate in working out how far apart the groups are.

We walked at a steady pace until the route changed and we had to walk on a fairly stony road which is a little harsh at the tail end of a hike when your feet are a little fed up. The very last stretch is on a disused railway line, it took about 20 mins and it was lovely to be met by Ian and Missy with COFFEE!

A quick chat at the end, madarins of a friends tree (yum) and a photo by the Bibbulmun Track sign and we were done.

Someone decided we had to go to Gnomesville. Which is weird, unless you are a big fan of gnomes in which case it is probably wonderful.

At this point my feet hurt after having had a little rest in the car the last thing I needed was another walk but we went, we looked, and gladly went home for a shower and a snooze.

We set off on Saturday, finished on Sunday afternoon and I think I stopped hobbling by Thursday. I had old tired trainers on and managed to get one little blister which disappeared after a good dousing with cream and no trainers.

Not many pics sadly as they all have Scouts that aren't mine in them apart from a strange one of my leg that Kristian took which I shan't publish.

By the map we hiked around 20 k with 5 children from age 10, the map is out of date and we now can't hike through a farmers field which added about 3k I think. We did this in around 7 hours not including rest stops.
Posted by The HoJo's at 4:49 AM