A busy weekend but mostly fun. Work as usual on Saturday morning, then home, fortunately I had bullied the kids into packing their bags before work so after a quick rest I dropped them ALL off in Busselton so they could go away, ALL of them, to Bunbury with Scouts.

Bowling followed by Pizza, except the service was so slow they cancelled and went to some disgusting burger place then I will not advertise for them! They slept in the Scout hall at Bunbury Sea Scouts, well some slept, some stayed awake all night talking and then watching a boy sleepwalking around who had to be kept away from the smallest boys as he was in danger of squashing them!

Nope, the poor, sainted Scout Leader didn't get any sleep!

They then spent the day sinking rafts, sailing and messing around on a canoe.

Ian and I spent the evening out to dinner with friends, a novelty for us, and it was lovely, really good fun. After dinner we tried to go out in Busselton but, quite frankly, it was lame, so we went home. The high point of the after dinner evening being our amusement at having to use a fingerprint to get into a rubbish pub where we only stayed for one drink, blech.

By eleven the Vasse was closed and the Ship too noisy outside and empty inside so we went home.

Sunday started out fairly lazy, our friends from last night were in Busselton at 6am to run a stall at the market selling off china and bits and bobs they no longer need, a shame they couldn't set up until after 7 though really :o) we sauntered around the market and drove to Bunbury. We stopped at the Marsdon Waterfront to wander around but the market there was almost empty aswell, a running theme. In to town to do a little shopping and check out a food and wine show that we decided was too expensive to bother with so drove a little further on and looked for somewhere to have lunch. After checking out every menu in the street we decided on chinese and it was the most authentic tasting chinese meal we have had in Australia in nearly 3 years, well done China City in Bunbury.

Being rather full we went back to the car and drove around to the waters edge and did what all elderly types do and nodded off.

We did check the 3 kids were still alive first!

About 45 mins after we hoped to leave we had all our sunburnt (gah) tired but happy children back and drove home. All 3 were asleep almost instantly :o)

Missy went to bed by 6, guess who had stayed awake all night, and the boys who sensibly got enough sleep, went later.

Lovely weekend, but what is this??? no pictures??? this will not do.

Kristian brought the garden buddy home, a little dog who visits your garden, has his picture taken and details of the plants in your garden get noted down. It is very sweet, here is a picture that for some reason didn't make it into the school book! 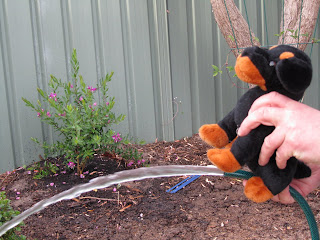 And the returning energetic scouts/cub 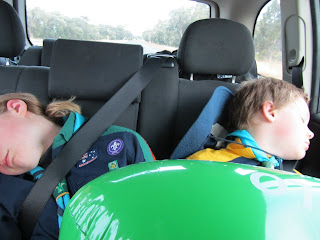 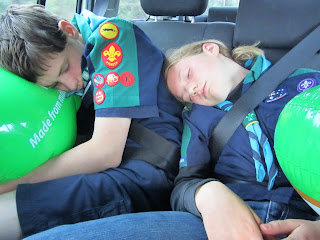