She started the day early which almost never happens, opened some presents, mostly items of black or grey clothing, and scampered off to school. Tradition has it that kids take sweets or cake into school so Marisa took in a piece of cheese. Her request was a cake that looked like cheese so we made 3. Cheddar, Edam and Danish Blue! 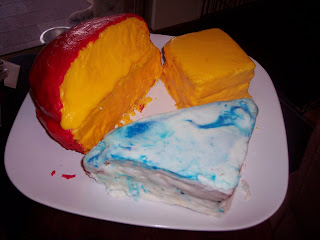 The Danish Blue went to school, the Cheddar got eaten at home on her Birthday, the Edam was supposed to be for Saturday when we had a house full of friends but we seem to have forgotten to do that.

Saturday morning her friends arrived and we piled into the car to go to Bunbury for a bash at Roller Skating. I'm fairly sure no huge injuries occured but there were some spectacular crashes. Carolyn skated round a couple of times and decided her forte was standing on the sidelines with a friend howling with laughter at the teenagers on the rink. Priceless. 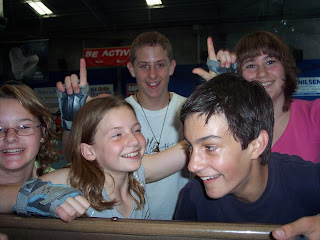 Some food was noshed, drink slurped, games played, no sympathy was given out for injuries, I'm harsh like that :o)
Kristian was allowed to bring a friend so he wouldn't feel the need to annoy the older kids and it worked well, D has a whizz on the rink and didn't tease K, who wasn't a whizz! poor boy limped around the edge wailing that he was the worst skater in the rink, I'm pretty sure I saw one person worse than him! 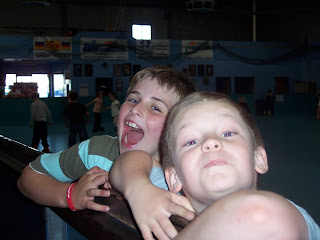 It would appear that at least one child is off for xrays this week, oops, and has been on crutches all weeks, double oops!

We drove back leaving kids in various places their parents were hoping we would leave them but still ended up with a few at the house playing on the Wii.

Eventually all but one were gone, so Ian, having finished work, joined us for a meal to end the day. Lovely.
Posted by The HoJo's at 12:26 AM

Sounds like a great day.
I love the cheese cakes. :-D

I love the roller skating! ♥ *snort*

Happy late B'day to mMrissa. Sorry for the derth of comments but I bunged up me arm again & typing one fingered is no joy so I have been limping round blogland at about the rate of one comment a day.

we are honoured then G!
hope all is well again soon

Cakes are great and it looks like you had a great day celebrating.