Last week was the ultimate bonding experience...the Cornerstone Bathtub Derby. Mixed groups from year 7/8 met at the beach and had an hour to contsruct a vessel capable of rounding a bouy and returning in hopefully one piece.

The children had about a month to prepare plans and gather duct tape, rope, cable ties, decoration and bottles up to 3l in volume. I suspect that mostly no planning was involved.

We filled my car with binliners full of milk bottles, having a cafe must have its perks! We hefted our haul onto the beach and got ready to start.

We had a great production line going, first person cable ties 2 bottles together, second person duct tapes them to a second pair of bottles, third person lays them out to look like a surf board, fourh person tapes groups of bottles together and we all take turns at taping and rolling the vessel over to ensure it will not fall apart.
Duct tape supplies ran low so we dispatched a Mum to Bunnings for replacements.

Panic over and with ten minutes to go we started decorating the boat with spray paint and coloured tape, not forgetting our flag on a pole. 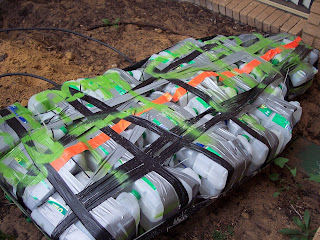 By now we had given away dozens of spare bottles to other less super organised groups, but strangely, when we asked to borrow duct tape we were refused! Harsh... very harsh.

The Fish, as we named her was ready and the crew were eager to go. We went to the start line and compared our boat to the competition. We were fairly sure of success as ours seemed capable of floating at least.

And they're off.......... well some are, some boats fell apart at the start and most people were somewhat submerged and getting stung. Our fearsome crew paddled away and returned I think some five minutes before the next boat, much cheering and chanting went on, followed by collecting all the bottles that were floating off into the distance.

After the next heat was the deciding race, so, who will be the winner? we discussed tactics and the benefit of not dangling your legs in the water and off they shot, only to return 10 mins before the opposition. Our boat remained intact, was capable of holding the entire team of 6 without sinking and was the only decorated boat (I think) 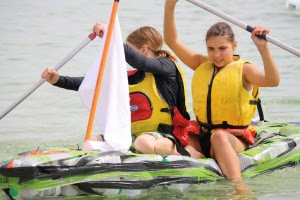 After we won soundly, no prizes were given for best decorated or titanic award or best design, shame really as we did a great job, we had a fab little crew who all worked hard and made sure that those that didn't get a chance to row in a race got a little trip around the beach at the end.

After we had tidied up the beach, we were supposed to put the boats in the skip, as ours was the only one to still be capable of floating we really couldn't bring ourselves to chuck it in a skip so I popped it in the trailer to go back to school and dry off a bit.
After a trip to work to brag about our sucess, modest? NO! I went to school to collect the children and managed to wedge the entire boat in the middle of the car, after letting some ari out of a few key bottles we drove home stinking of sour milk.

The Green Machine is in the garden and will at some stage go back to the beach so the 5 of us can test drive it again! 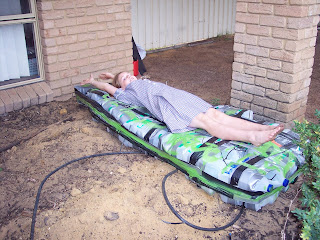 A fab mornings work. Thanks Team!

Picture of Missy and friend paddling away is courtesy of the school website, nice pictures in the local paper too.
Posted by The HoJo's at 12:54 AM

lol I can't believe you let your kids set sail on that. Every time I look at it I shake my head in wonder. The day of miricales is not done with yet! ☺

hee hee how rude! although I didn't go on it... so I guess that makes me a bad mamma :o) still need to go to the beach with it again, but the sour milk smell is a bit fierce!