Sunday 23rd August 2009
We went to Boyanup farmers Market this morning, we had ordered a load of cakes from a woman we bought some from last time we went to the market, so we had to pick them up for use in the Café.
From Boyanup we drove to Balingup for the Medieval Carnival, we went there last year and the weather was really hot, this year it was cold and windy so there were not so many people there.
Last year we had all three kids with us and they all dressed up in medieval costume and we had a great time, this time we only had Kristian with us and he didn’t want to dress up or look at a lot of stuff that the other two might want to see, so it didn’t take us as long to go round this time. 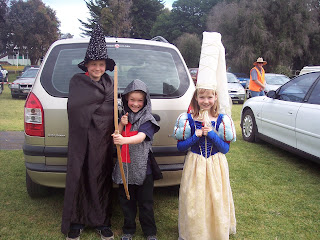 Kristian and Carolyn did go for a ride on a camel while we were at Balingup, that was probably the highlight of the day for Kristian because he loves camels.
We got back to Busselton at about 5pm and picked up Fraser and Marisa from Marisas friends house on the way home, her friends mum stayed with them at camp last night and volunteered to look after them today while we were out.
Fraser and Marisa were knackered, not as knackered as they were after last camp but knackered none the less.
Yet again they stayed up chatting for most of the night instead of going to sleep and were feeling sorry for themselves, so we fed them, chucked them in the shower and sent them to bed, they were asleep in seconds.
Posted by The HoJo's at 12:23 AM