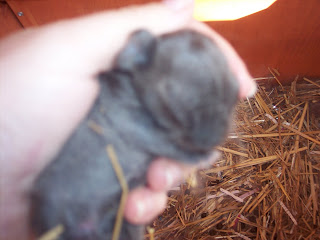 Sunday 2nd August 2009
When we got up this morning we found a lot of rabbit fur in one of the cages, in anticipation of one of the rabbits being about to give birth we had just worked out who the mother was going to be and where we were going to keep her and her offspring, when Marisa ran in to the house announcing that Squeak had just given birth for the second time.
Apparently it doesn’t matter in the rabbit community although we haven’t found a rabbit willing to confirm it, but the fact that the father is the son of the mother and the brother of his babies is not a problem.
We left mother and babies in the hutch that they were in and went out to look for some straw to keep them warm.
We went to the market and bought some food for us, including some Duck Eggs, the first Duck Eggs we have seen on sale since we have been here and some Mandarins from our favourite local grower, but we couldn’t find any straw.
We had a coffee on the front and then went to the pet shop on the LIA (Local Industrial Area), there we found a cheap rabbit hutch just about big enough for a mum and babies, some straw and some new bowls for food and water and took them home.
When we got home we transferred mum and four babies to the new hutch and made sure they had loads of straw and food. 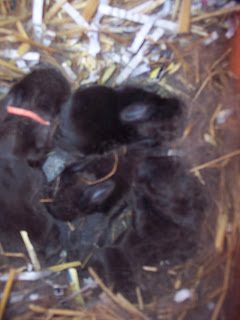 So what are you doing with all these bunnies? It sounds to me like you're starting a bunny breeding farm! Please tell me you're separating them off or plan on selling the mother soon - she seems to be the cause of all the problems!

Awww so cute .... you will have to watch out or you will have even more baby bunnies soon, its really true about the saying "at it like rabbits" they really are not fussy and will continue breeding over and over.