So, Christmas morning arrived early this year, Fliss and Aimee were awake by 6am and chatting, drawing the attention of our youngest, so the volume gets louder and louder. At 7am they woke up Marisa, by 7.30 I was begging them to shut up till 9am!
By 8am I was making tea and having a shower.
Presents started early this year (thanks girls).
We all had fun, the pile was huge after the girls arrived. 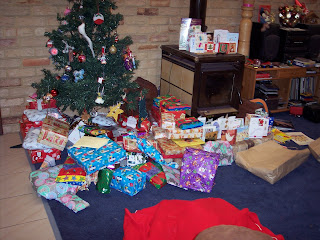 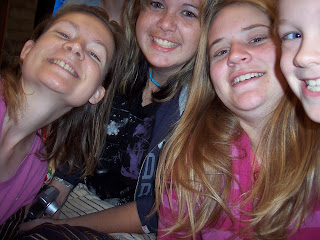 Lots of excitement as the parcels were unwrapped. 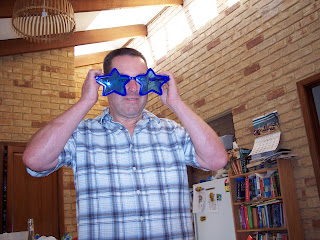 A surfboard!
A Telescope! (At last)
A kayak! woohoo!

The turkey was put in the bbq and off to the beach we go..... 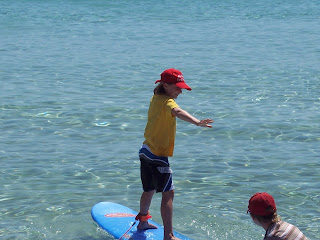 Yep, he is a natural. 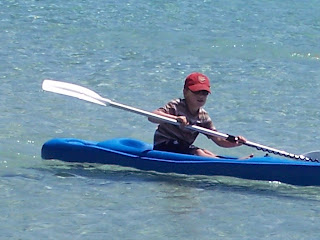 Home to make more salads, yum, the turkey was fab, we ate loads, we pulled crackers, we told dodgy jokes, in the SUN! 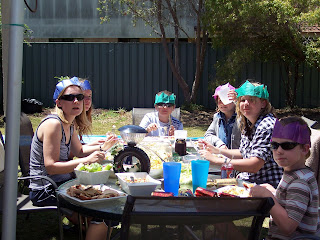 A snooze in front of Narnia, Prince Caspian (thank you Elena)

A play with the puzzles.
A Walk on the beach.
More food.

So far so good, I feel a bit of drinking may occur soon. (Although the girls started at 9am this morning (!) but are pacing themselves.

Welcome to Chrissy the Aussie way! :D I have some great pics thanks to Liddy but I am far too tired to post tonight.

I'm still freaked by the whole idea of Christmas in the sun...

Thanks guys :o) we had a great time, the run up was weird, it being warm n'all but hot Christmas holidays is great! I can see why they celebrate Christmas in July out here as well though as it is cool enough to eat hot dinner and veggies! not sure I'll bother though
xc