Sunday 7th September 2008
We had a lovely lie in this morning with no kids to worry about, we got out of bed at about 10.30am and went out to the new Outdoor Pursuits shop that has just opened on the Light Industrial Area (LIA), there was supposed to be a Sausage Sizzle but there was nothing left by the time we got there, they take their Sausage Sizzles seriously over here, specially when it is a freebie.
The new store is called Ranger and it was full of anything you could possibly want for a camping or fishing trip, we put our names down for the free draw for an Eski (cool box) but came out empty handed. We then went in search of a Concrete Paving display at a company called Cemex, according to the paper the display is on show 7 days a week. When we got there the place was closed so we had a little whinge to ourselves about the ad being wrong or us having gone to the wrong address, as we couldn’t find another Cemex we assumed the ad was wrong.
We then went to pick the kids up and give Fliss and Aimee a bit of rest before Fliss has to go back to work again on Monday, it turns out that they didn’t have Pizza last night because the Pizza company forgot to give Fliss a ring (she has no credit in her phone), they had Spaghetti instead.
Apparently Fliss tried to get the kids too go to sleep at 10pm but when Aimee got home from work at about 1am, Marisa and Kristian were still awake, Aimee threatened to phone Carolyn if they didn’t go to sleep which didn’t work, so she threatened to phone Ian instead and they were asleep within ten minutes. Fliss had slept on the floor with the kids overnight and looked the most tired out of all of them, still, serves her right for volunteering.
We took pity on Fliss and Aimee, or possibly put them through an extra couple of hours of hell by taking them out for lunch with us, as a little reward for looking after the kids.
Today is Fathers Day over here and we decided that we would go to Bunbury and have a meal in a little restaurant called Extensions, the restaurant hangs off the sea wall overlooking the Ocean and being a lovely sunny warm day it was the perfect place for lunch.
On the way there we stopped at a lookout tower and climbed up that to get a better view of Bunbury, personally we think Bunbury looks better from the ground, where you can’t see too much of it at one go. It did give us a chance to have a look at the layout of the town as we had only driven through it before, Fliss and Aimee were particularly interested because apart from on the bus to Busselton they had never been to Bunbury.

The view back down the lookout steps 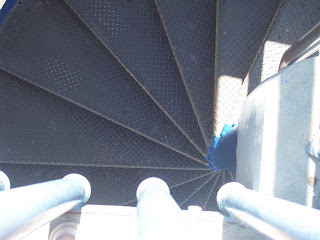 The Marina at Bunbury from the lookout 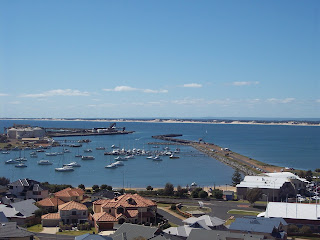 When we got to the restaurant we found that they were not doing a la carte and were only doing a Buffet today as it was Fathers Day, when we enquired how much it was the girl said it was $30 for Adults and $15 for Children under 15. When she added it up she charged us for 2 adults and 4 kids, letting us off the cost of one child, we think she was taking pity on us having to put up with Fliss and Aimee’s childish behaviour. The meal was very good, plenty of meat, fish and veg and loads of dessert to follow, the trifle in particular took a bit of a hiding. Firstly Marisa scooped out all the Chocolate Sponge out of the bottom of the bowl, Kristian followed her by taking all the Jelly and the Aimee took all the Custard, by the time any other customers got to it there was just this big pile of cream perched on the top of a bowl with a hole in it where everything underneath had been scooped out.
Thoroughly full and satisfied we decided to walk some of our dinner off with a stroll along the beach, Fliss Aimee and the kids spent most of the time dodging, or trying to get wet from the waves crashing on the rocks, after a while we had to drive back because Aimee had to go to work. 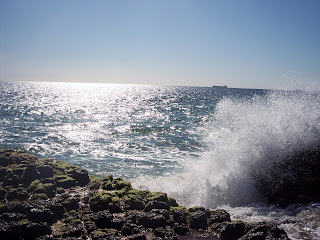 When we got back to Busselton we picked up the kids stuff, dropped Aimee off at work and went home to watch our Family Film for the week, as it is Fathers day Ian had the choice and chose Superman the movie and everyone enjoyed it, a bit of good clean fun with no swearing for the kids to watch for a change.
We all had an early night and the kids were out like lights almost straight away.
Posted by The HoJo's at 2:04 PM

awesome day guys! we got in for half price gotta love it!! was a good reward for having the kids over night. ps when is the next sleep over??? i'll get credit this time for pizza!! xfliss